The architect Balkrishna Vithaldas Doshi (born 26 August 1927 in Pune, India) is one of the foremost pioneers of modern architecture in his home country. In 2018, he was the first Indian architect to be awarded the renowned Pritzker Prize for his life’s work. Jolanthe Kugler, curator at the Vitra Design Museum, talked with the 91-year-old architect about the melding of Indian traditions and Western modernism in his buildings, about his revolutionary social housing concepts and his formative years with Le Corbusier in the 1950s.

You worked for and with Le Corbusier in Paris in the 1950s and later in India. What did you learn from this experience?

To rediscover myself as an Indian and my home country as a place where social and cultural traditions and lifestyles are the key to sustainability. You returned to India in 1956.

How did you experience Ahmedabad in those years?

Independence, hope, and freedom from dependence set the tone of the atmosphere in India during the 1950s. People’s aspirations were high. The vision of independence meant finding identity and appropriate solutions for habitat and socio-economic and cultural development.

For centuries India has been formed by its caste system. Even today the divide between the members of different castes is huge, between rich and poor. What can architecture, what can urban planning contribute towards diminishing these differences?

In spite of the diverse socio-economic and cultural situation post-Independence, the aspiration was to create cultural identity through celebrations and festivals and to bring back the spirit of the nation.  Chandigarh became the symbol of modernity as well as innovations, a new world of harmony and peace, challenging the existing situations. The result was the emergence of new institutions that founded their curriculum in a multidisciplinary approach which would eventually create a new contemporary identity.

You once said that planning affordable housing has a lot to do with dignity. Where does dignity come to bear in your buildings?

In beauty. In spaciousness. In a certain spatial harmony. In the conscious interaction with the weather and the seasons. And in the ability to age well and to stay in reasonably good shape even after many decades.

You integrate elements of traditional Indian design into many of your buildings.

First of all, in India we don’t consider architecture as a building or a built form. A house is a home, a dwelling. A house is an extension of family life. Indian architecture is really flexible, but also very climatically oriented. All houses have courtyards and verandas, there’s a natural flow between inside and outside, lifestyle and climate. It’s all connected organically.

At the end of the 1970s you started building a space to host your own architectural studio. You called the building »Sangath«, which means »moving together«.

This building is more than an office. It’s also a place to meet people, and a home. To build it I shook off all the international influences and tried to develop a new vocabulary that integrates modernity while at the same time drawing strongly from Indian traditions. I tried to be my own self. Intuition and searching are the keywords here, not rationality and answers. The entrance is narrow and hidden. The spaces are interconnected and appropriately lit for multiple activities. I was looking for memories of my childhood. Losing oneself. Moving by means of all the senses.

You can find all information on the exhibition »Balkrishna Doshi: Architecture for the People« here. 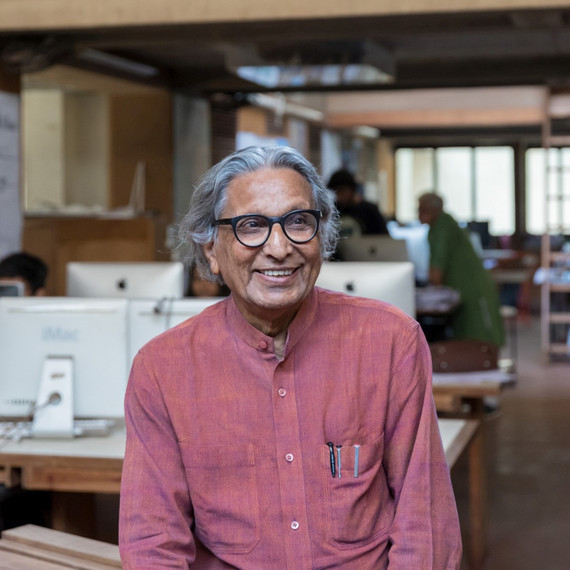