From 7 June to 6 October 2013, Vitra Design Museum Gallery will present the exhibition »Archizines« , celebrating the recent emergence of a plethora of alternative and independent architectural publications around the globe. »Archizines« invites visitors to peruse 90 titles from over 20 countries, alongside video interviews with their creators. The exhibition illustrates that today’s engagement with architecture is both critical and enthusiastic, with new media, typography and artistic engagement playing a key role. Edited by architects, artists and students, the featured publications provide new platforms for commentary, criticism and research into the spaces we inhabit. Further, they make an important and often radical contribution to architectural discourse. »Archizines« makes evident that the emergence of new digital media hasn’t led to the decline, but rather to a boom of inventively designed, sophisticated and often experimental printed publications. Many of the publications exhibited originate from Europe or the US, while others are from China, Chile or Tanzania. Some titles are internationally renowned, such as Pin-Up Magazine, Volume or Apartamento. However, the exhibition equally shows rarer publications like Index Newspaper from Portugal, produced on newsprint, or the American-Japanese journal Draftery, which focuses on unusual architectural drawings. Since »Archizines« launched at the Architectural Association, London, in November 2011, the project has toured internationally to around 20 venues. Among other cities, Barcelona, Berlin, Sydney, Dublin, New York, Osaka, Tokyo were stopovers of this tour. Since its inaugural presentation, the exhibition has grown from about 60 to over 90 titles. »Archizines« was curated by Elias Redstone and initiated in collaboration with the Architectural Association. Elias Redstone is the Editor-in-Chief of the London Architecture Diary and the author of the upcoming Phaidon publication Shooting Space: Architecture and Photography. As an independent curator, he has worked for organisations such as Storefront for Art and Architecture in New York, the Victoria & Albert Museum and the Design Museum in London. The Architectural Association School of Architecture is one of the world's most influential schools of architecture. Among its alumni are Zaha Hadid, Rem Koolhaas, Lord Rogers, Will Alsop and many others. 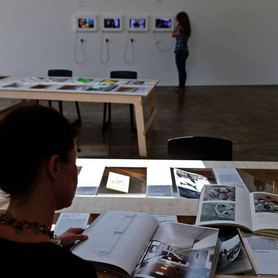 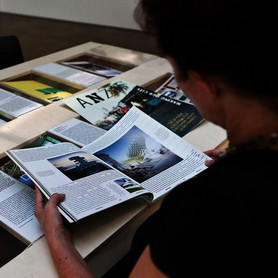