Isamu Noguchi (1904 - 1988) was widely considered among the most important sculptors and designers of his day. His definition of sculpture was a broad one, and he therefore not only created sculptures, but also designed stage sets, luminaries, furniture and public spaces. The Vitra Design Museum was proud to launch the first large solo exhibition devoted to this multi-talented American artist in Europe. The show’s 80 exhibits, which have never been presented in this combination before, illustrate Noguchi’s amazing versatility, as well as underlining his interdisciplinary and intercultural approach. Internationally famous theatre director and choreographer Robert Wilson, who designed the exhibition, created an atmospheric installation and quite unique sound and lighting to display Noguchi’s works to full advantage.
Noguchi grew up in the United States and Japan. On moving to New York in the 1920s he first came into contact with Western avant-garde art. In 1927, he spent six months in Paris on a Guggenheim scholarship, working in Constantin Brancusi’s studio, a stay which decisively shaped his artistic training. Of equal importance for his later career was his training under masters of traditional Asian painting and pottery during a trip to China and Japan in1930 - 1. On returning to New York, this traveler between East and West became acquainted with Martha Graham – a meeting which resulted in a highly fruitful process of artistic collaboration. Up until the 1960s, Noguchi designed 21 stage sets for this outstanding representative of modern dance. They were generally very reduced, yet full of tension, such as the sets for Herodiade (1944), or Judith (1950), both of which could be seen in the exhibition.
During the 1940s and 1950s, Noguchi created his most famous furniture designs, the Coffee Table with its sculptural look, and the ingenious Chess Table (1944), both for Herman Miller, as well as the refined Rocking Stool for Knoll International. During his stay in Japan in 1951, Noguchi developed a strong enthusiasm for Asian lamps made of paper and bamboo. He combined traditional manufacturing techniques with new shapes, replaced the candles with electric bulbs, and thus created the first akaris – light sculptures for daily use.
Noguchi’s sculptures often encourage a practical use: There is the Garden Seat (1963) made of basalt and granite, or the Water Table (1968), whose hollows not only collect water, but would serve just as well as a bird bath. As for the Slide Mantra, an organically shaped sculpture fashioned in white marble, with which he represented the United States at the 1986 Venice Biennial, it is also ideally suited for children to play on.
For his art projects in public spaces, Noguchi often collaborated with famous architects. In 1951, for instance, at the suggestion of Kenzo Tange, he designed the railings for two bridges located in the Hiroshima Peace Park. In the United States, he cooperated for years with Gordon Bunshaft from Skidmore, Owings & Merrill architect’s office, with whom, for example, he made the Sunken Garden for Yale University’s Beinecke Rare Book and Manuscript Library (1960 - 64). During the 1970s and 1980s, the dimensions of such commissions increased. Sadly, it was not possible until after Noguchi’s death to begin work on his last and largest project, the 162-hectare Moere Numa Park in Sapporo (1988 - 2004). 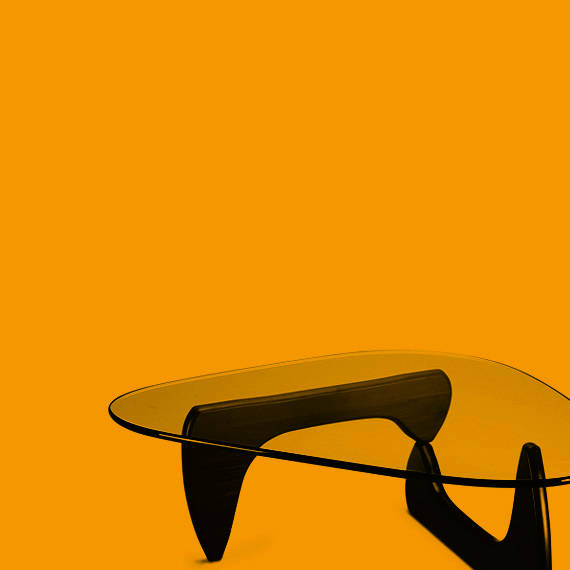