On 28 September 2014 spontaneous protests erupted in Hong Kong as a reaction to proposed changes in the electoral process. The international media not only reported on the protesters, but also on the myriad designs and infrastructures they had created. Everyday objects were turned into barricades, shelters and sculptures. The umbrellas that gave the movement its name, the »Umbrella Movement«, protected the demonstrators from the tear gas used by the police. The exhibition in the Vitra Design Museum Gallery presents this act of civil disobedience through the objects and projects that were spawned by the movement – illustrating that design not only shapes and defines products, but can function as an agent of change in politics, communication and social innovation.
The protests brought international attention to the city, but also inspired artists and designers, as well as the general public, to take part in the demonstrations via acts of creativity. Informal design had been a feature of previous protests in Hong Kong, though most of them were short-lived. The Umbrella Movement was much larger in scale and longer in duration – the three major protest sites were cleared after seventy-nine days on 15 December 2014. The movement generated places that both activists and the public at large could shape and define through their own creativity. In addition to sharing information at an international level, the widespread use of social media by protesters gave impetus to this collaborative creative process, allowing this collaborative creative process to grow and take on evergreater dimensions as the protests unfolded.
»Objection! Protest by Design« illustrates various aspects of the demonstrations on the basis of photographs, models, plans, objects and videos. The exhibition is thematically divided into three areas:
The area of the exhibition dedicated to the theme of Design & Community addresses digital art and innovative, socio-critical design as well as the ad hoc objects produced over the course of the protests. Selected photos, videos and visual records are shown, many of which were also posted online during the protests. These enabled people to see the events from a variety of perspectives. For example, the »Add Oil Machine« by the Hong Kong group Stand By You projected thousands of messages from all over the world over a period of 70 days onto the wall of the Central Government Offices, while the »Make a Paper Umbrella to Show Your Support« initiative provided online instructions on how to fold an umbrella made of paper, giving citizens a way to express their support. At the same time, this section highlights the complex organization of the protests with examples of websites that were set up by demonstrators.
The section entitled Public & Private shows how the boundaries between public and private space became blurred and were redefined during the demonstrations. Throughout this period, many protesters lived on the streets of the occupied areas. They erected barricades to create a safety zone and constructed a village of tents for more privacy. Umbrellas were deployed as temporary roofs between pedestrian walkways, through which the public space was symbolically privatized. The practical and informal structures that arose during the protests provide a novel illustration of the basic structures required for human co-existence.
The section of the exhibition under the name Spotless portrays the respectful mentality of the protesters towards public space. Unlike many protest actions in other places where walls were routinely sprayed with graffiti and property was destroyed, the public spaces of Hong Kong remained undamaged. At the centre of the protest site, a message wall was established, taking its name from the famed Lennon Wall in Prague. Thousands of colourful sticky notes were posted here as a forum for exchanging messages and expressing support for the protests. Waste disposal systems were also set up by the demonstrators.
Conceived by the guest curators Rony Chan and Michael Leung, who operate an interdisciplinary design studio under the name MIRO in Hong Kong, the exhibition presents the work and voices of some twenty designers, activists, artists and theorists. 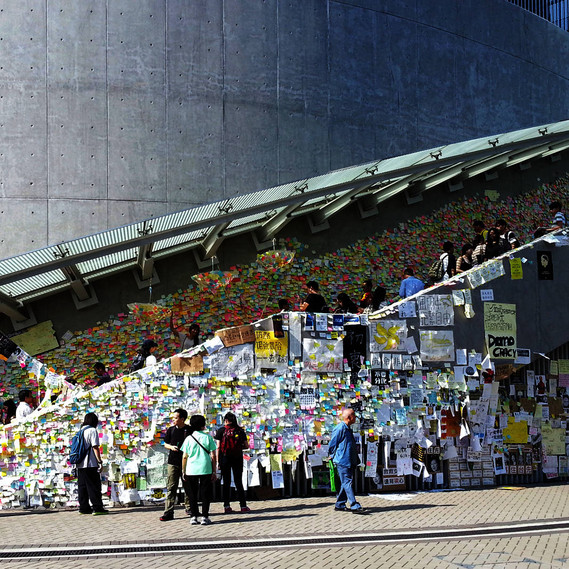 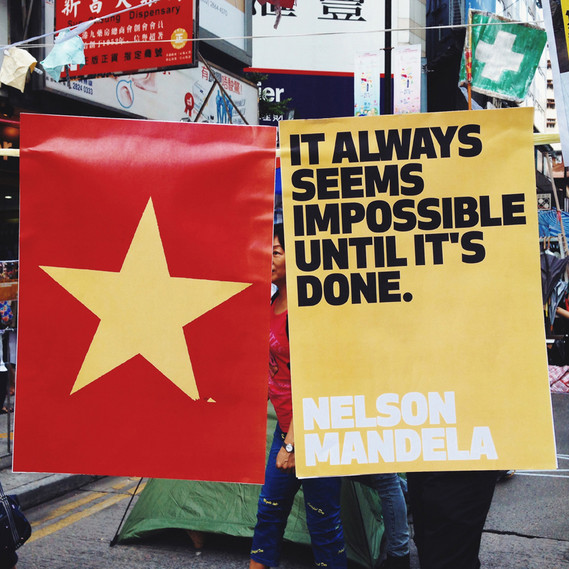 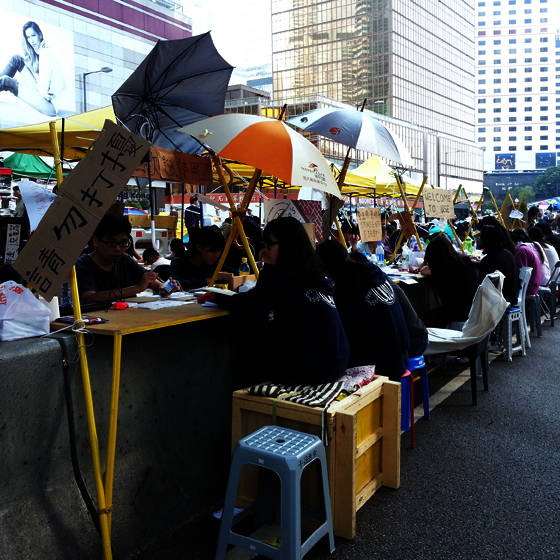