Alexander Girard (1907–1993) was one of the most influential textile artists and interior designers of the twentieth century. He created worlds of colourful opulence in which everything was precisely and artfully coordinated, from the smallest details to the big picture. Examples include the Irwin Miller House in Columbus, Indiana (1953; architect Eero Saarinen) and the legendary restaurant La Fonda del Sol (1960) in New York. Girard designed furniture, small objects and fabrics, worked for companies like Herman Miller and Braniff International Airways and collaborated with such designers as Charles & Ray Eames and George Nelson. This major retrospective of Girard’s oeuvre draws on the Vitra Design Museum’s holdings from his private estate and presents furniture, textiles and sculptures as well as numerous sketches, drawings and collages never shown before. In addition to his own designs, it presents the creative universe from which Girard took his inspiration: folk art from all over the world, which the designer collected throughout his life.
A selection of 300 objects from his collection is also featured in the exhibition.

Raised in a cosmopolitan family with European and American roots, he grew up in Florence, studied architecture in London, and then lived in New York and Michigan before eventually settling in Santa Fe. Practising from the late 1920s until the late 1970s, he created stunning interiors for restaurants, private clients and corporations, as well as more than 300 textile designs – mostly for the American furniture company Herman Miller after becoming director of its textile division in 1951. Girard’s clients also included companies like Braniff International Airways and John Deere for which he handled a broad range of design activities – from interior design, textiles, furnishings and small objects to typography, corporate design and exhibitions.

Among Girard’s most well-known works are the interior design of the Irwin Miller House in Columbus, Indiana (1957, architect: Eero Saarinen), his own home in Santa Fe (from 1953) and the legendary restaurants La Fonda Del Sol (1960) and L’Etoile (1966) in New York, where even Andy Warhol was a frequent guest. In 1965, Girard developed the complete corporate design for Braniff, applying his characteristic visual language of vibrant colours and patterns to tickets, the lounge areas, and even the planes themselves. Yet he also created influential works on a much smaller scale, such as his design of the »love« motif, which remains one of Girard’s most well known graphic images to this day.

An important source of inspiration for Girard was his extensive collection of folk art objects, which he accumulated on his travels through Mexico, India, Egypt and other countries and which ultimately comprised more than 100,000 artefacts. Many of these objects were used by Girard in his interior design projects or in spectacular exhibitions, such as the »Textiles and Ornamental Arts of India« show at the Museum of Modern Art in New York (1954) or the »Magic of a People« pavilion he designed for the HemisFair World’s Fair (1968) in San Antonio, Texas, for which he meticulously displayed more than 10,000 of his collected artefacts. In 1982 the Museum of International Folk Art in Santa Fe opened the exhibition “Multiple Visions: A Common Bond”, designed and mounted by Girard himself and still on display today.

Even if Girard’s work is less well known than that of prominent contemporaries such as Charles & Ray Eames, his oeuvre has experienced a revival in more recent years. Girard’s often underestimated significance lies in the fact that he restored what classical modernism had rejected in design – colour, decoration, opulent interiors. With an ingenious ease, he combined ostensible antagonists: craftsmanship and industry, pop culture and high culture, playful décor with masterful reduction. From today’s perspective Girard, anticipated many developments of the following decades: from the colourful language of postmodernism to the current debates on post-industrial design and the globalisation of our everyday aesthetic.

In 1996, the Vitra Design Museum took possession of Girard’s personal estate. The holdings encompass 5,000 drawings and photographs respectively, many never before shown personal sketches, several hundred textile samples, accessories, furniture items and folk art objects. This archive serves as the basis for the exhibition »Alexander Girard. A Designer’s Universe«. Further exhibition objects are on loan from the Museum of International Folk Art in Santa Fe as well as Alexander Girard’s family.The exhibition design is being created by the London-based studio Raw Edges, headed by Shay Alkalay and Yael Mer. Like Girard, the duo’s work is characterized by a keen interest colours and patterns. Over the past years, Raw Edges has achieved international acclaim with its installations for such companies as Kvadrat, Moroso and Louis Vuitton.The exhibition is accompanied by an over 500-page catalogue. The publication provides the first scholarly examination of Girard’s oeuvre in the form of multiple essays, an extensive list of works and a comprehensive biography. 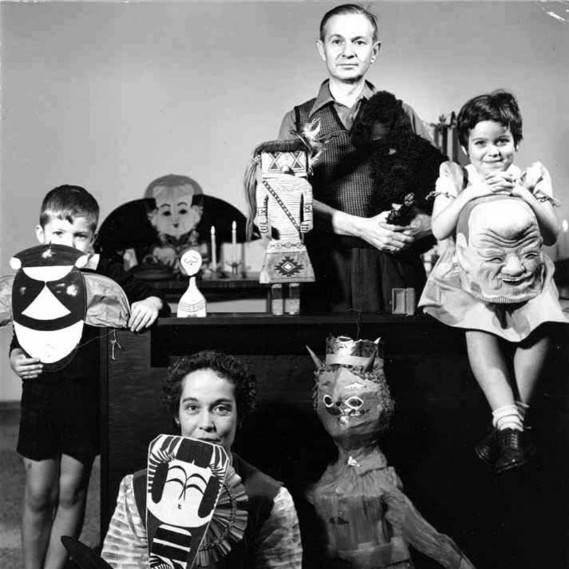 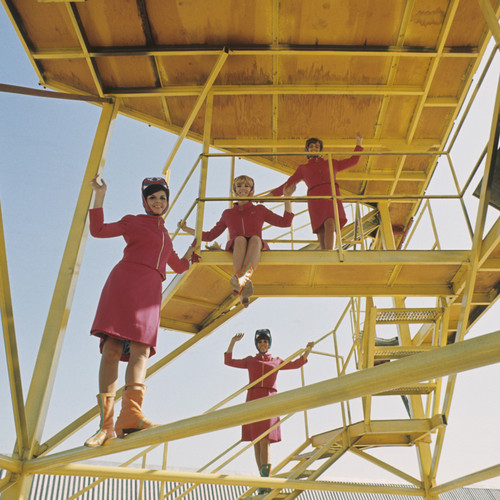 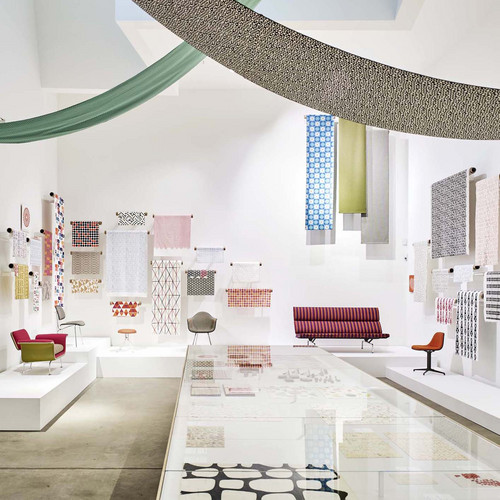 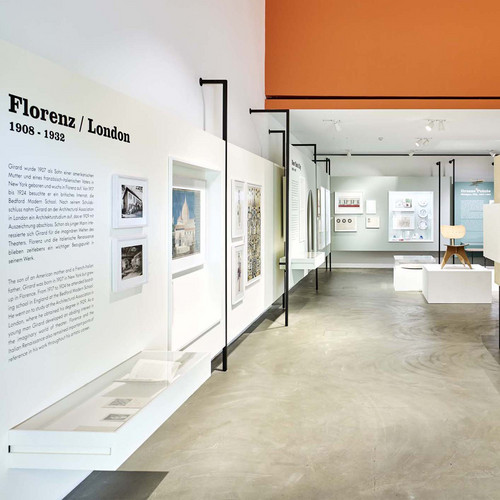 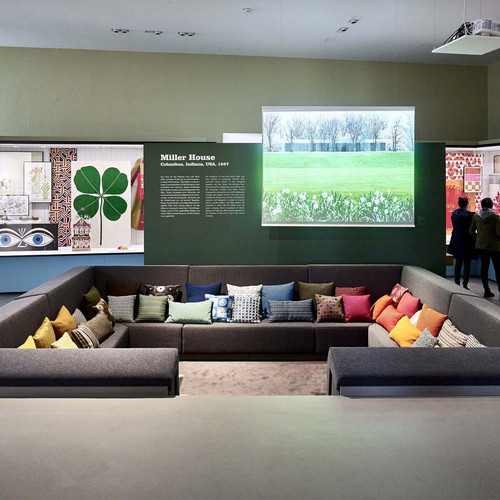 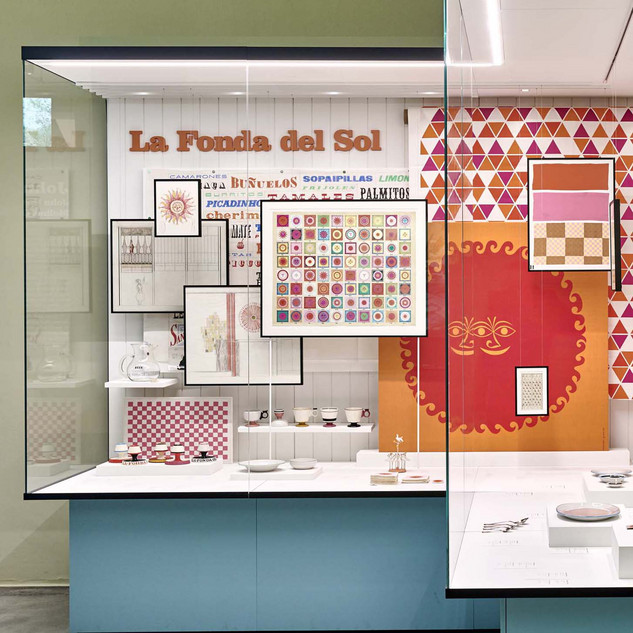 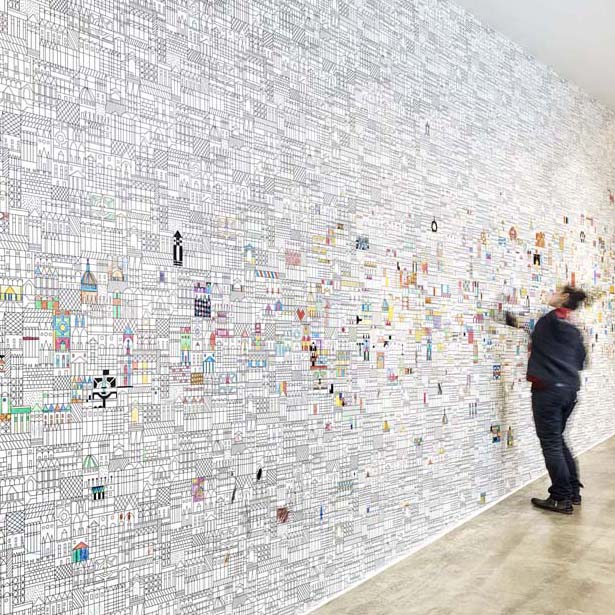